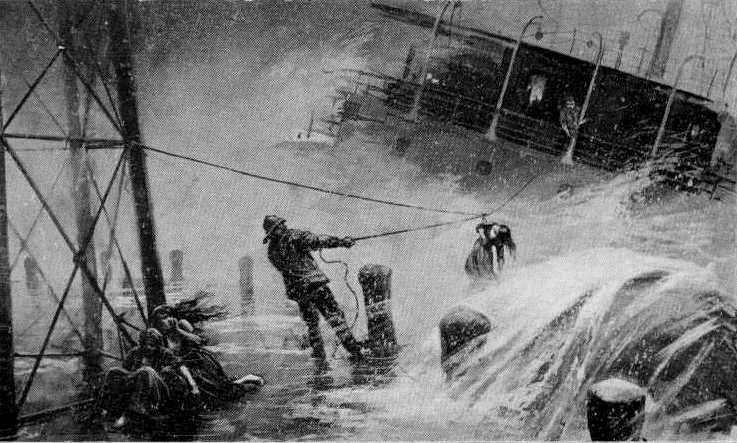 Besides the day when both Strauss and Mahler took part in a concert of their own works, there were other special and unusual concert offerings in February of 1907 (to be discussed later). However, the biggest story of the month concerned the fate of “the German Opera Company,” which had been put together by the singer Mr. Ernest Van Dyck for the purpose of a visit to London, where a number of German operas were performed at Covent Garden in January and February. The company ended their stay earlier than advertised, due to the “indisposition” of Mr. Van Dyck (the run was a financial loss). Twenty-two of the singers began the journey on a steamer with the name “Berlin” on Wednesday, February 21st. They left England from Harwich and had almost reached “the Hook of Holland” near Rotterdam when a severe storm caused their ship to break into two. One half sank, and those remaining on the other half had to wait for help to arrive. Rescue attempts were delayed by the continuing storm, so that it was only late on Friday afternoon that eleven people, including three women from the opera company, were rescued. Later that night a civilian volunteer and his nephews took a tug boat out, boarded the ship, and retrieved the three remaining survivors, who were incapacitated by frost bite. It turns out these three women were also from the opera company.
All told, in “the Berlin Disaster” 128 of the 144 people on board perished, including 19 from the opera company. See below for accounts of the wreck from the Times, including harrowing testimony from the survivors.

The Berliner Tageblatt‘s coverage included the call for a tunnel to be built under the English Channel. “It cannot be denied that precisely because of such occasional maritime catastrophes the tunnel under the channel is urgently required. Its realization would be a sign of a growing culture.”1Berliner Tageblatt 22 Feb 1907 p. 1.

One thought on “February 1907: Shipwreck”