What does all this information tell us? 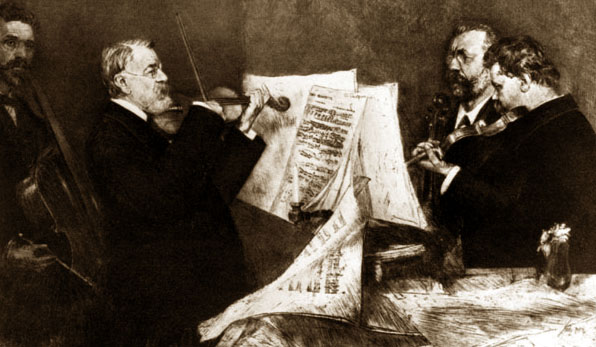 After my last post on the music of February 1907, my interlocutor Nicholas wondered why I compile all this information. There are many reasons, but I will point out two things I’ve learned here.

I started documenting the music of 1907 as a way to investigate claims made after Joachim’s death that he was out of touch with his own age. In the Saturday Evening Post, Henry T. Finck claimed that now that Joachim was gone, thousands in Berlin were eager for the Hochschule to “be animated by a more modern spirit and be brought up to date in principle and practice.” In one of the few obituaries with a critical view, Paul Bekker characterized Joachim as hopelessly conservative, isolated and unmoved by all the music going on around him.
I wondered: did Joachim deserve this reproach? What exactly was all the music going on in Berlin that Joachim was ignoring?
In the month of February, the Joachim Quartet played a concert of Mozart, Quartet in B-flat, K. 458 (“The Hunt”), Schumann’s F major Quartet, Op. 41, no. 2, and the Brahms String Quintet in G major, Op. 111. Other chamber groups played new quartets by Glière and Kaun. That certainly sounds more adventurous than Mozart, Schumann, and Brahms. However, these particular pieces are not exactly progressive. Kaun’s quartets are not readily available as scores or recordings, but his style is consistently characterized as late Romantic. The quartets by Glière are formally conventional and tuneful. In this case, then, Joachim was not being hopelessly conservative by ignoring these quartets.1Furthermore, his Quartet did occasionally play some new works: in 1902, Dohnányi’s first quartet, in 1903, d’Albert’s Quartet op. 11, and in 1904, C.V. Stanford’s Quintet, op. 81. If we were looking for something progressive to perform, there was Schoenberg’s String Quartet No. 1 in d minor, op. 7, published in 1907. One review called it “a tough nut to crack,” which is a fair assessment, I think; no one in Berlin took up the challenge that year.

Second observation: an example of the increasingly mobile and international character of the music world, and especially the interchange between the U.S. and Germany, can be seen in the case of Myrtle Elvyn. Born in Texas in 1885, her family moved to Chicago so she could study with the German pianist and concert agent Carl Wolfsohn. She then became a student of Leopold Godowsky–in Berlin, even though he had taught in Chicago and was a U.S. citizen by then. Although Elvyn’s fame (while it lasted) was in part due to her looks (all those picture postcards), she was evidently serious about composing, which she studied with Kaun, another German musician had spent over a decade in the U.S. before going back to Berlin to teach private students.

In sum: by documenting all the concerts in 1907, one can see how “progressive” the Berlin scene for art music was, and who the people were who lived and performed in the city at this time.

One thought on “What does all this information tell us?”