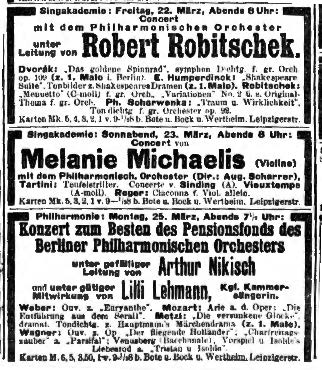 The first season of the Philharmonic began in 1887 with ten subscription concerts conducted by Hans von Bülow. The popular concerts also began at this time. Not only did the orchestra play these three times a week, but they were often hired by soloists who wanted to play concertos, or by conductors wanting to conduct.The initial reason to play so much was simply survival, to try to stay financially viable. That was why they went to the seaside spa resort of Scheveningen in the Netherlands, where they played afternoon and evening concerts every day for four months (June 1-September 30).

This summer season continued even after the orchestra was well established. During the winter season, they earned extra by serving as the orchestra for the Philharmonic Chorus, the Chorus of the Singakademie, the Stern Gesangverein, and other organizations. In 1907 they also played two “chamber-orchestra concerts” conducted by E.N. von Reznicek, and two of Busoni’s concerts of new music. Finally, Nikisch led them in a subscription of six concerts in Hamburg. It could have been more: in the 1903-04 season they had also done two concerts in Hannover, and in April-May, a Russian tour of 18 concerts.

August Scharrer, the main conductor of the popular concerts in 1907, had replaced Josef Rebiček, who died on the job at age 60 on March 24, 1904. The much praised Scharrer lasted for three seasons, leaving after 1907.1Scharrer has the distinction of being the conductor for the concert of Hazelda Harrison, the first African-American pianist to play on the Philharmonic concerts, on October 22, 1904. She played the Grieg and the E minor Chopin concertos.

I wondered if it possibly could be true that during the 1095 days of his tenure, Scharrer had conducted 1000 concerts (the never-reliable Arthur Abell in the Musical Courier claimed this). To test it out, I made a list of all the concerts played by the Philharmonic in a single month, March of 1907. Indeed, there were only four days when they weren’t part of a performance!2And I might not have found them all. Two of those were Easter Saturday and Sunday (March 30-31), which came after playing the Bach Saint Matthew Passion on Thursday and Good Friday. Another of the free days was March 7th, which was the day before they played a subscription concert in Hamburg. And the last was the 18th, possibly a true free day.
Besides the last subscription concert of the season on the 11th, there was the traditional extra concert at the end of March that raised money for their pension fund. Both of these concerts had ticketed dress rehearsals the day beforehand, which were always on Sunday at noon. Sunday was a popular concert day, so they played two concerts those days. They played in the Philharmonic Chorus’s final concert on the 4th, and there were 12 popular concerts. The remaining days were taken up by individuals who hired them for a concert, which in March were 3 violinists, 3 pianists, and 3 conductor/composers.
I only count 16 out of 31 days for Scharrer conducting, however. (In the list below the darker shaded dates indicate a day off for Scharrer.)

Concerts with the Berlin Philharmonic, March 1907