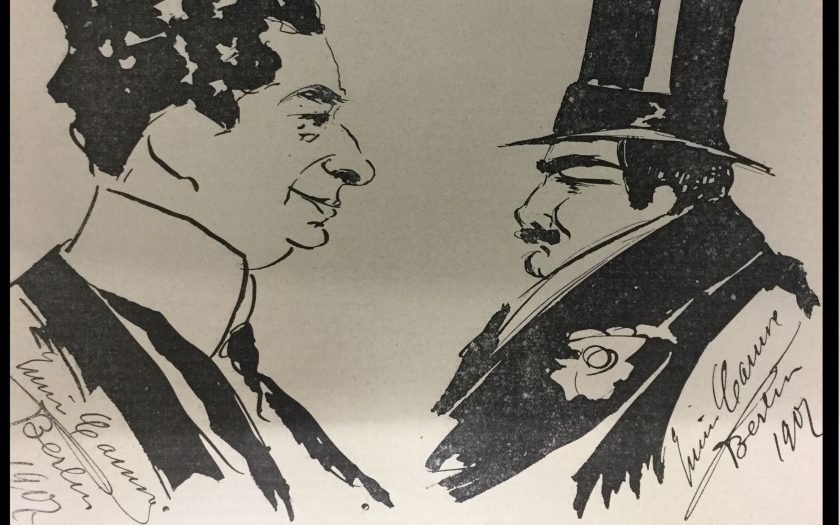 This is a sample of Wüllner’s rendition of the Hexenlied. All 27 minutes of the work is available on YouTube and is highly recommended.

The violinist Alessandro Certani is giving a concert with string orchestra, conducted by Otto Klemperer (1885-1973). Klemperer’s career is about to take off. One of many concerts this year of early music, this is the “first performance from old Italian manuscripts” of music by Porpora, Nardini, and Veracini.

(Reviews were not enthusiastic. Certani played works by other old Italian masters, including Locatelli, at a concert on 29 November. Reviews of Certani commented on his good tone, but also a tendency to be “wild.” I have not found much about this Italian violinist, but Enrico Caruso drew a caricature of Certani and himself that was published in the Allgemeine Musik-Zeitung’s 8 November 1907 issue–see above).

Gregor Fitelberg (1879-1953) is conducting the Philharmonic with works from young composers from Warsaw, including his own “Das Lied vom Falken.” He is concertmaster of the Warsaw Philharmonic and will became its conductor in 1908.

There is a notice in the paper today that the scheduled Joachim Quartet concert has been postponed to 6 April. Joachim came down with influenza after the Quartet did the complete Beethoven Quartets in Vienna at the beginning of the month. The seventy-four-year-old is still too ill to play.
(The April concert will be the last Joachim Quartet concert in Berlin.)

Marianne Heinemann is giving a piano recital of d’Albert, Schumann, Beethoven, and Chopin.
(The review in the Berliner Börsen Zeitung was positive, but Die Musik did not think that she was ready for concertizing. I have not found a trace of her before or after this concert.)

The 7th “Elite Concert” of the Mozart-Saal Orchestra takes place today at the Zoo at 4 pm, for 50 pfennigs. Violinist Bernhard Dessau is the soloist. The opera tonight is Tannhäuser. Die Lustige Witwe continues at the Theater des Westens, and Das Schützenliesel is at the Deutsch-Amerikanisches Theater.