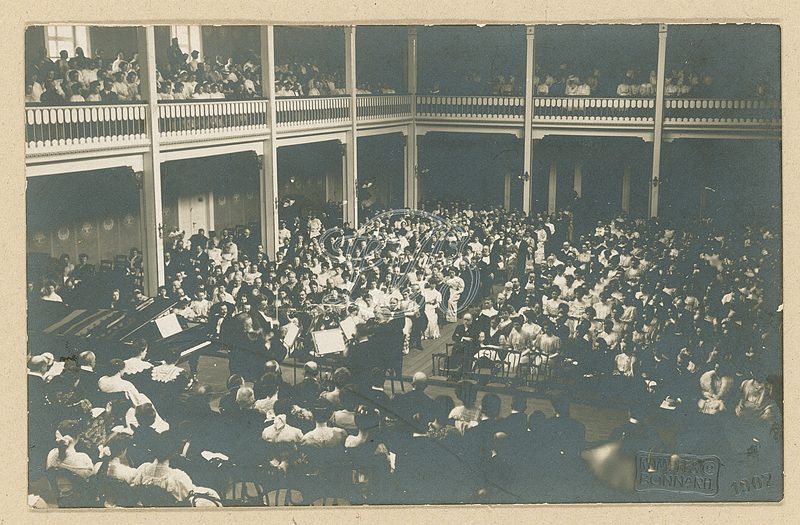 Image: The Quartet at the 1907 Beethoven-Haus Bonn Festival

The final year of the Quartet: Reconstructing the last concerts from newspaper and music journal reports

On January 10 the Quartet played an all Beethoven program: op. 135, op. 59 #3, op. 18 #5. The Quartet then traveled to Königsberg, where they played the Brahms Op. 18 Sextet and the Schubert Quintet, with Robert von Mendelssohn playing second cello.

January 25 was a piano trio series concert, in which Joachim substituted for Emanuel Wirth. The program was the D minor Trio of Schumann, Bach  Sonata in G major for piano and viola da gamba, and the G major Beethoven violin sonata.

The Quartet played the Schubert Quintet on their subscription concert on January 31. The other works were Haydn, op. 64 #4 and Beethoven, op. 18 #6.

The third subscription concert in Berlin was on February 28; it was attended by the Kaiserin, and included the Brahms G major Quintet Op. 111 (Andreas Moser on second viola). The Mozart Quartet in B-flat “the Hunt” and the Schumann F major were the other works.

On the way to Vienna at the beginning of March there was a stop in Teplitz, with the program: Quartet in a minor by Brahms, a D major Quartet by Mozart, and the Beethoven Quartet in B-flat, Op. 130. A review noted that Joachim was weak in the Brahms, but commented that while Joachim might no longer be proficient, you knew you were in the presence of greatness.1MW/NZfM 74 pt.1 (2 May 1907): 424.

The last two major events in Joachim’s career were centered around Beethoven and Bach. From March 4-8 the Quartet performed all sixteen Beethoven quartets in Vienna. The series was completely sold out and was received with acclaim. One critic declared: “Of course a critique of the Joachim evenings is completely out of the question. What does it matter if one place or another was played more powerfully and brilliantly in earlier years by the venerable heads of this ideal four-in-one–what is the meaning of an occasional minute deviation from absolute tonal purity when considering the incomparable, unforgettable impression of the whole thing.”2“Von Kritik müssen wir den Joachim-Abenden gegenüber selbstverständlich vollständig absehen. Was verschlägt es, ob etwa die eine oder andere Stelle von dem verehrungswürdigen Haupte dieser idealen Viereinigkeit in früheren Jahren kräftiger, glänzender herausgebracht wurde–was bedeutet selbst eine gelegentliche kleine Abweichung von absoluter Tonreinheit gegenüber dem unvergesslich herabzwingenden Eindruck des grossen Ganzen.” Review dated 21 March, Musikalisches Wochenblatt/Neue Zeitschrift für Musik (1907): 298.

Joachim then came down with the flu and had to cancel a concert in Budapest, but after a period of recuperation he was able to participate in the final Berlin quartet concert of the season on April 6th: Haydn, op. 64 #6, Beethoven, op. 18 #3 in D major, and Schubert, Quartet in D minor, D. 810.

Since the previous year, the Quartet’s violist Emanuel Wirth had been unable to play (Karl Klingler, a 28-year-old Joachim student who had been teaching at the Hochschule for four years already, had been taking his place). The 64-year-old had two eye operations during that time and the papers reported that he had gone completely blind. But the second operation was successful and he was able to rejoin the quartet for what turned out to be group’s last concert in Berlin.

The following week Joachim travelled to Territet on Lac Leman in Switzerland for a period of recuperation.He caught up with the Quartet in Bonn, where he and Wirth participated in one last Beethoven Haus Festival from May 5-9. Similar to the reaction in Vienna, the reviews dismissed Joachim’s technical failings as negligible compared to “the high spirituality and inwardness of his playing.”3“Wenn auch Joachim’s Technik nicht mehr ganz die alte ist, was absolute Reinheit der höchsten Lagen und Tonfülle angeht, so ist dies ein sehr unbedeutender Mangel gegenüber der hohen Geistigkeit und Innerlichkeit seines Spieles.” Musikalisches Wochenblatt/Neue Zeitschrift für Musik (1907): 493.

The Quartet’s last performance was an unheralded appearance on May 13 in Munich.

Finally, for Joachim there was a Bach festival in Eisenach from May 26-28, where the Bach House and Bach Museum were dedicated. Joachim had spent years raising funds for the Bach monument of 1884, and had participated in commemorations of Bach his whole career. He was given the honor of being handed the ceremonial key and being the first to enter the new building. He then played several pieces by Bach. One critic compared him to Arnold Böcklin’s painting of the Fiddling Hermit (“der Einsiedler”) stressing that while Joachim made a memorable picture, his playing was not what one would want to remember him by.

Joachim returned to Berlin in order to resume his teaching duties at the Hochschule in June, but collapsed at a rehearsal of Mendelssohn’s oratorio Elias.5Carl Halir, “Aus Joachims letzter Lebenszeit,” Berliner Volkszeitung, August 16, 1907, p. 2.

The rest of the quartet continued on to their London concerts scheduled in June and July, Karl Klingler filling in this time on second violin, while Halir took over the first violin part.

After two months Joachim died on August 15. Those present, besides his six children, were the members of the Quartet and his close friends Franz and Robert von Mendelssohn.