The infamous Mr. Arthur M. Abell of the Musical Courier 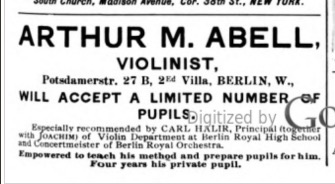 Arthur M. Abell (1868-1958) lived in Europe from 1890 to 1918. Starting in 1893 he was a Berlin correspondent for the Musical Courier. After the War he returned to New York and wrote for the New York Times and other outlets.
Abell’s musical credentials included his training as a violinist. In 1895 he advertised for students in the Courier, describing himself as a pupil of the Hochschule’s Carl Halir: “Empowered to teach his method and to prepare pupils for him. Four years his pupil.” The only announcement I have found of a performance by Abell is of a violin recital with Frau Clara Abell at the piano at Berlin’s Bechstein Hall on March 26, 1898, with ‘gratis’ admission. The program included a Bruch Violin Concerto and a Bach Sonata. Besides being a violinist, Abell was connected to the increasingly lucrative business of violin collecting. His father-in-law was Dwight J. Partello, an instrument collector who ended up amassing a collection of 25 valuable violins, including four Stradivarius. Partello, who worked for the State Department and the U.S. Treasury, intended to bequeath his collection to the Smithsonian and thus to “the nation,” but his daughters, along with Abell, successfully contested the will in 1920-21.

Arthur Abell made no pretense of objectivity in his reporting, and was more negative about Joachim and the Hochschule than any German-language paper. In 1901 he printed an anonymous item on “The Joachim Bowing,” written by a violinist who spent the year 1889 at the Hochschule. He reported that not only did this bowing technique have nothing to do with Joachim, but also “Joachim did not teach much of anything to his students,” and “the majority of Joachim’s assistants are remarkably incapable violinists.”1Musical Courier dated Berlin, December 17, 1901, vol 44 (1902): 32. This must be the New York violinist George Lehmann, who is listed as a Hochschule violin student in 1889 and who is the author of “Violin Study—Instructive Comparison,” The Musician (1901): 23. He intimated at least twice that the Mendelssohn Prize was completely under Joachim’s control.2Musical Courier xlIII no. 18 (1901):34. In 1902 he declared: “The methods of the Berlin Hochschule kill individuality and temperament. That is absolutely certain.”3Musical Courier (1902), dated 23 January, 5. In 1903 the Courier gossiped: “It was long an open secret that Wagner’s music was barred from production at the Royal High School of Music, and it is a patent fact today that the same sacred portals are practically closed to Richard Strauss.”

Abell’s chief claim to notoriety lies with his book Talks With Great Composers: Candid Conversations with Brahms, Puccini, Strauss and Others (Philosophical Library, 1955). His “talks” are presented “verbatim” with Brahms, Puccini, Richard Strauss, Joseph Joachim, Engelbert Humperdinck, Max Bruch, and Edvard Grieg. These artists reveal to Abell  “their intellectual, psychic and spiritual experiences while composing.” This involves a “semi-trance”  in which one never completely loses consciousness. It is described as “a border state, guided by a higher power.” Abell also relates Tennyson’s views on creation and Darwin’s understanding of the immortal soul, courtesy of Joseph Joachim’s recollection of their exact words, transcribed by Abell “with the help of a bilingual stenographer.”

The book was published in 1955, long after the composers quoted could confirm or deny their remarks. In the Preface Abell explained that he had delayed publishing because he had  promised Brahms to wait fifty years after his death. Despite the dubious content, the book has been translated, reprinted, and continues to be quoted in New Age self-help books on various aspects of creative inspiration.

As his Talks with Great Composers makes abundantly clear, Abell took great pride in his acquaintance with the celebrities of the music world. His reporting for the Courier was mostly in the form of gossip and inside information. A party at his house in 1907 was commemorated in the Courier with a large photograph of “A Remarkable Group of Artists”:

The Courier documented Abell’s hobnobbing with four additional photographs in 1907.

In “Apollo in Good Humor,” “The grotesque player on the double bass is Chaliapine, the great Russian basso. At the piano is Sobinoff, the famous Russian tenor. The others are, from left to right: Arthur M. Abell, conducting; Gliere, the youthful composer; Hermann Fernow, head of the Concert Direction Hermann Wolff; Leo Blech, the composer and conductor at the Berlin Royal Opera; Loewenfeld, director of the Schiller Theater; Godowsky, the famous pianist, and young Metzel, the Russian composer.” (November 1907)

And “A Morning in Eberlein’s Atelier” illustrates the news item: “Gustav Eberlein, the famous German sculptor, and Madame Eberlein arrived in New York last week on the Augusta Victoria, having crossed the ocean as guests of the Hamburg-American Line. Professor Eberlein and Arthur M. Abell, Berlin correspondent of the Musical Courier, are good friends. In the photograph we see an interesting group at Eberlein’s atelier in Berlin. The great sculptor is at work upon a statute [sic] of Carla Abell, the nine year old daughter of Mr. and Mrs. Abell. The child is already celebrated in the German capital as a fancy dancer of rare grace and fantasy.” (December 1907)

As a celebrity hunter, Abell was keenly aware of the Joachim’s special aura that set him apart from other musical stars: “There was always that about Joachim that inspired mingled feelings of awe and veneration. Not to mention his own concerts, it was an event in itself when he attended a concert. Berlin is the home of many musical celebrities, and the presence of a Strauss, or a Humperdinck, or a d’Albert, or any other famous musician attracts little attention at a public function, but when Joachim entered a hall, a flutter went through the whole audience.”5Arthur M. Abell, “Joseph Joachim. In Memoriam,” Musical Courier 55, no. 10 (September 4, 1907): 13.

2 thoughts on “The infamous Mr. Arthur M. Abell of the Musical Courier”