Again: There are too many concerts! 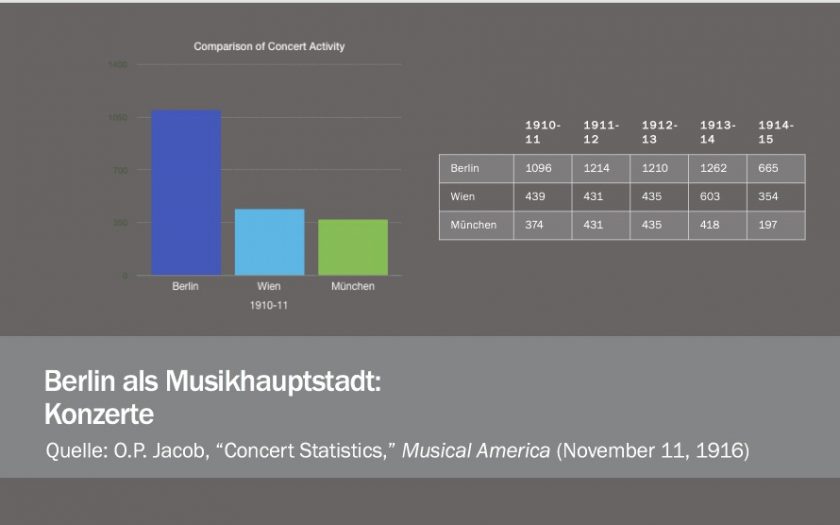 Who is to blame?

The complaint that there were too many concerts in Berlin was familiar even in the 1880s; in the 1890s the problem started being diagnosed. The music critic Oskar Eichberg was convinced that the number of concerts had grown so much because they were being given for advertising purposes: musicians playing in the provinces were much more likely to draw an audience if they could claim a performance in Berlin.1Oskar Eichberg, “Die Musikkritik,” in Gustav Dahms, ed. Das Litterarische Berlin. Illustriertes Handbuch der Presse in der Reichshauptstadt (Berlin: R. Taendler, 1895), 139-47.

These performers were not just from “the provinces.” The Musical Courier reported in 1891 that there were two thousand Americans living in Berlin, and that most were music students. “Most return to be teachers, so that every city in the United States now has its Berlin and Leipsic graduates.”2M.K., “American Music Students in Berlin,” Musical Courier (1891):

In 1897 Edith Lynwood Winn, a former violin student at the Hochschule and author of several articles on musical life in Berlin, described how one went about putting on a concert. Her account supports Eichberg’s theory: the concert giver strategically courts the critics, gives out complimentary tickets, and has a claque of friends, all with the goal of a good review.

When a virtuoso is sufficiently advanced, is pressed for money or desirous of helpful criticisms before entering upon an American tour, he gives several concerts in Saal Bechstein or in the Sing Academie. ….At his first concert he is very fortunate if he pays expenses. He calls upon the newspaper critics in order to establish a friendly spirit between them and himself, and, at the last moment before the concert, he scatters tickets far and wide in order to insure a full house. At his concert one hardly knows how he is being received, so vociferously do his friends applaud. If he receives favorable comments from the Berlin critics his road to success is sure.3Edith Lynwood Winn, “Concerning Music Study in Berlin,” Music 12 (1897) 459.

The following year, another music critic named Oscar (this time Oscar Bie) had some specific ideas about who was to blame. He based his theory on enrollments in piano at the Klindworth-Scharwenka Konservatorium, where there were 387 piano students (41 male, 208 female) for the 1895-96 school year; for 1896-97 there were 383 (40 male, 239 female). The course of study was two years long on average. Bie calculated that subsequently every year there were 50 female piano teachers from this school alone who were going out into the world. The blame could be attributed to the conservatories, which admitted too many piano students, but Bie focused on how many female piano students were being admitted. “Think about the giant proletariat coming out of our music schools…it is easy to calculate the inundation.”4“Man bedenke an die Riesenproletariat, das aus unseren Musikschulen hervorgeht….Die Überschwemmung ist leicht zu berechnen.” Oscar Bie, Das Klavier und seine Meister (2nd ed., München: I. Bruckmann, 1901), 283-84.

Bie counted the number of concerts in a nine week stretch out of the concert season and came up with 159 concerts, 58 of which were piano. He didn’t offer any statistics indicating that there were actually too many pianists, however.5According to Bie’s count, 36% of the concerts were by pianists; my figures for 1907 have only 20%. Bie was certainly not the only one to allude to the growing art proletariat responsible for the increasing overproduction.6For instance, when the Beethoven Hall opened in 1899 the Neue Zeitschrift declared: “Sie ist ein neuer Beweis der stets zunehmenden Ueberproduction und des mit ihr verbundenen Kunstproletariats. Wenn bis jetzt jeden Abend vier bis fünf Concerte stattfinden konnten, werden in der künftigen Saison deren fünf bis sechs absolviert werden. Wo soll aber das Publikum herkommen, woher die Kritik….” NZfM 66 (1899), cited in Muck, vol. 1, 254.

Most critics fixated on their own problem of having too many concerts to review. In 1897 Eugenio Pirani of the Neue Zeitschrift für Musik proposed that critics simply ignore performances by mediocre musicians who had no business giving a concert. He reasoned that the number of concert givers would subsequently decline when the number of reviews declined. However, in 1902 another critic disputed the idea that the problem could solve itself. When there are so many newspapers and journals, he argued, there is always going to be someone who will give a review.7S.D. Gallwitz, “Lokalpatriotismus und Kritik,” Die Musik II (1903): 31-35.

In 1905 a critic who called himself “Caligula” brought up some new points in a long rant in the Neue Zeitschrift.8“Caligula” was a reference to a Berlin political critic at the time who went by that pen name. He argued that accommodating an increased quantity of concerts makes the quality go down, which in turn affects the quality of the criticism, because it’s impossible to do a good job when stretched so thin. He went further and lamented how art lost its aura when it was too plentiful, so that now even great artists were passed by. The times in which we live are increasingly blasé, needing increasing stimulation just to incite a reaction to music, he observed, thus invoking the “decadence” diagnosis.
“Caligula” also argued that performers were not so much the perpetrators as the victims of the concert business. Although the proceeds of a solo concert were seldom more than 100 Marks, it cost 300-400 M for a decent concert hall, and the Singakademie or the Beethoven Saal were not to be rented out for under 1000-1200 M. And why bother with such a big venue? Only 40-50 out of 1200 places were usually filled, he claimed. And then there was the fee for the manager or the concert agency. One could go back even further, and calculate all those expensive piano lessons with the famous name.9Caligula, “Saison Betrachtungen,” Neue Zeitschrift für Musik 101 no 10 (1905): 203… dated 1 March.

Edward J. Dent’s report for the January Monthly Musical Record of 1907 reiterated the idea that pianists from abroad were the main culprit: “Berlin is a veritable paradise of English and American pianists. It is generally supposed in London that to have given a concert in Berlin stamps a player as a finished artist….. It need hardly be said that an American connection is a most useful asset to any young executant who wishes to make a success in the capital of the German Empire.”10Edward J. Dent, Monthly Musical Record 37 (February 1907): 29.

Dent described the audience for these recitals as being usually made up of friends and fellow students who would amuse themselves by keeping the applause going, just to see how many times they could make the performer return to the stage for another bow. If they were successful enough to bring on an encore, however, they fled the hall immediately.

Instead of blaming pianists, the Signale thought the Lieder performances were the worst, because at least with piano and violin a certain amount of training and technical facility was necessary. When the voice was the instrument, performers with no formal training were taking the stage.11“Das Jahr 1907,” Signale für die musikalische Welt (1908): 5.

Whether or not they were the worst, they were certainly the most numerous of all the solo performances. My figures for 1907 have 205 solo voice concerts, compared to 172 piano and 78 violin.

Karl Storck penned many impassioned pleas for a more restrained expansion of concert activity. Writing for the Klavier-Lehrer journal, he pointed out that a public recital in Berlin was a poor way to demonstrate pedagogical training and ability.12Klavier Lehrer No matter how well one played, it was no guarantee that the performer knew how to teach. Storck blamed the increasing number of venues for concerts in 1907 on speculation in real estate.

Other critics persisted in the belief that the market would sort itself out. J. C. Lusztig thought that having so many opportunities to give a concert would make players realize more quickly that it was not worth putting on multiple concerts, because the critics rarely changed their opinion.13Lusztig, “Aus den Berliner Konzertsälen 1906/07,” Bühne und Welt (1907): 165.

The Musical Courier added: “So it comes about that many concerts are given by newcomers of which no notice is taken whatever in the papers. This is the best way to weed out the mediocrities and when it becomes generally known that they are likely to get no mention these débutantes will keep away from Berlin.”14Musical Courier, October (1907): 10.

Finally, in 1906 Wilhelm Altmann reminded his fellow critics that besides the solo concerts that aggravated them so much, there were also all kinds of other offerings–choral, orchestral, chamber–that for a good price brought a great deal of pleasure to a diverse audience.16Wilhelm Altmann, “Vor der Konzertflut,” Nationalzeitung No. 505/6 1905, cited in Die Musik V (1906): 284.

2 thoughts on “Again: There are too many concerts!”