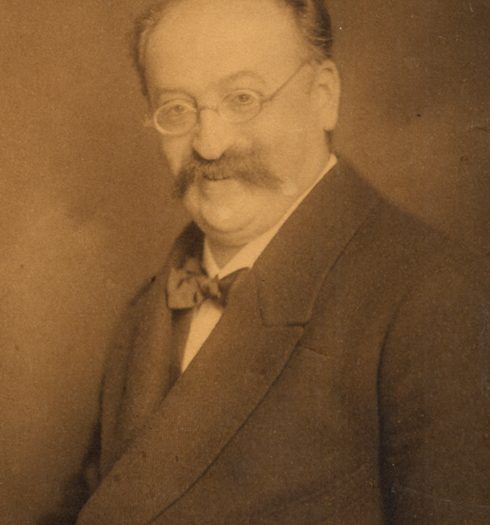 The impressive website Schenker documents online includes hundreds of transcriptions and translations of letters to and from the music theorist Heinrich Schenker (1868-1935) and his diary entries over a period of more than thirty years. It is very user friendly, and thus easy to find out what Schenker had to say about musicians who performed in Berlin in 1907. (For instance, I found out that the pianist Moritz Violin, whom I had only noticed because of his name, was Schenker’s best friend! He played an a minor concerto by C.P.E. Bach on 17.1.1907.)
It is not surprising that Schenker venerated Joseph Joachim as the embodiment of integrity and tradition. He attended the last performances in Vienna of the Joachim Quartet in March of 1907. Over five sold-out evenings they performed the complete Beethoven Quartets. Schenker only commented after the first concert: “First Joachim evening. The same magnitude of his appearance remains undiminished.”
Schenker counted along with Joachim as “models in the very difficult art of performance” the baritone concert singer Johannes Messchaert. In 1907 in Berlin Messchaert sang in several Bach cantatas, the St. Matthew and St. John Passions, and also gave solo recitals, including a performance of Winterreise.
Otherwise, it seems that Schenker was almost always disappointed with the musicians he heard in the concert hall. As a pianist, he had very critical things to say about the generation who had studied with Liszt: Lamond, who specialized in Beethoven; Emil Sauer, Eugen d’Albert, Reisenauer, and Ferruccio Busoni. It seems that no one could ever perform Beethoven to Schenker’s satisfaction.

On Frederic Lamond:
Diary entry of 1 December 1906. “Beethoven evening: Op. 106. Lacking any ability to conjure up the mental image for which the composer’s ‘notational signs’ are merely a substitute! Not remotely within the sphere of what the composer vividly beheld, a mere slave to the music engraver and hand position. Even his very technique is inadequate! Unimaginable how this pianist could have come to be regarded and named as ‘the Beethoven interpreter’! Stunted shape, stunted mind, stunted, strangulated touch. The fugue was the most successful, but only in terms of its ‘execution.'”

On Emil Sauer: Diary entry for concert on December 6, 1906.
Sauer, second concert: “Beethoven Op.109 […]. Raw, without understanding, especially the second movement. But even the finger dexterity does not prove reliable (last variation). So what is all the fuss about it, when it lets him down in the most difficult, in its particular style so-to-speak most conceivable and most beautiful tasks, or is one to call a finger technique still great, even when it functions-and then only shoddily-in pieces of lesser spirit? Dreadful performance of the Chopin Nocturne in G major (6/8); a player of such shallow spirit. Head of a master school! Especially since he is the first-and for the time being the only-Imperial-Royal Professor in Austria! What a mixed-up world!”

On Eugen D’Albert: Feb 4 1907: “D’Albert Concert: lacking artistry, sloppy, downright irresponsible toward himself — even iniquitous if insofar as it had to be taken in mala fides [bad faith]. Only the Scarlatti Pastorale in D minor/E minor was an exception. His usual program trotted out a thousand times and now deceitfully dished up as “historical” and administered to the public!”

Other pianists did not fare well with Schenker, either.

On Ernst von Dohnányi:
29 November 29 1906: “Dohnanyi II: Beethoven, Op. 106, the Adagio truly wonderfully played; the first and last movements, conversely, performed with only inadequate technical means, the fugue particularly muddied with pedal (although certainly not without a clear conception of the whole). His own compositions in Schumannesque style; each one lacking that higher, more distinctive quality of imagination. Chopin sometimes good, but the G minor Ballade badly and carelessly rendered.”

On Leopold Godowsky and Serge Koussevitsky:
Feb 8, 1908: “Koussevitzky (Russian conductor): Superficially powerful: (Safonov has built up Tschaikovsky ‘s Romeo u. Juliet quite differently). Bad conducting of the bass lines, etc. Godovsky plays Tschaikovsky’s Piano Concerto with licence, aiming for effect. The first movement of the concerto is a feeble potpourri, what’s more under the wrong key designation, B flat minor! (It ought really to have been called D flat major!) What insecurity, what dilettantism still in the (identification of) keys!”

On Richard Strauss, as conductor and composer:

Sunday, December 16 1906: Richard Strauss conducts [Philharmonic Concert]: “Oberon” Overture, Mozart’s G minor Symphony, and the “Eroica.” With the most naked exposure of his weaknesses, his inability to achieve synthesis, and his lack of any really deep empathy ‒ and interpretive organization! Offenses of all sorts against the best of the pieces. Like how a woman or child makes music merely upon a single idea. But excitement among the public concerning the composer of Salome !

May 25 1907: On Salome: As to Strauss’s music: in its “motives” (one-measure ones, or even shorter!), it forever returns to the same cheap device, the device of tension through neighbor-notes; in its broader materials, on the other hand, it reaches an unparalleled triviality. Bad passing motions etc. (in overall context and at the detailed level).(Motives are too short!)